India’s celebrated elephants: Can our actions at least speak as loud as our words? | World Animal Protection Skip to main content

India’s celebrated elephants: Can our actions at least speak as loud as our words?

Elephants: A traditional symbol of divinity and royalty

For centuries, India has regarded the majestic royal beast, the elephant, as its cultural symbol. The highly revered Hindu God, Lord Ganesha, is said to be a remover of obstacles and a provider of fortune and good luck. Considering this beloved God has been envisioned with an elephant head and a human body, elephants are believed to be an incarnation or representation of Ganesha. Furthermore, people believe that Lord Indra, the God of rain, thunder, and lightning, has a divine white elephant as a mount, thereby establishing elephants as a symbol of divinity and royalty. These mythological and cultural Hindu beliefs have established elephants as sacred symbols of peace, mental strength, and power. In line with these views, over the years, people have worshipped and used elephants in several ways. For example, royalty has employed war elephants to strengthen their armies, flaunt the kingdom's bravery and bring prestige and stature to their title. Elephants were also used in religious ceremonies and rituals in temples. Some elephants were even kept as pets and considered family members in ancient times! 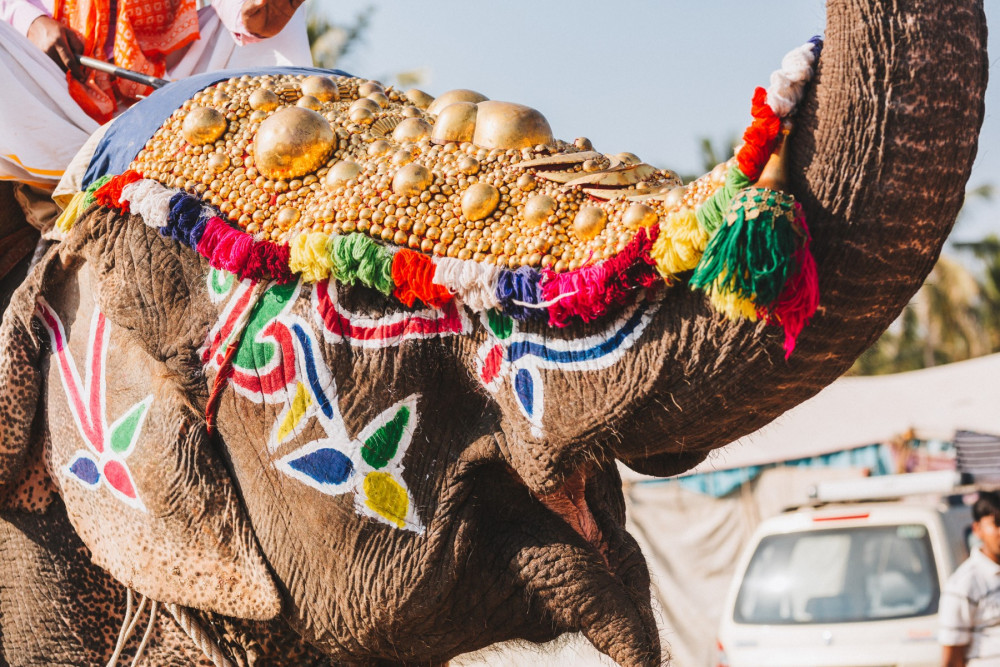 Continuing the traditional practice, even today elephants in India are used in temples and religious festivals. According to a World Animal Protection report[1], India is considered the “birthplace of taming elephants for the use of humans.” In the state of Kerala, these festivities and ceremonies are very popular, especially with tourists. The festivals are extravagant and flamboyant, consisting of lively drummers, colorful dresses, sparkling fireworks, dance performances, flashing parsons and peacock feathers, and elephants adorned with ornate jewelry. Some examples of these festivals in Kerala include the Anayadi Gajamela, Asia's largest elephant pageantry, where as advertised by Kerala tourism, “a hundred gutsy jumbos lined up in a temple premises have their head held high in pride and glory”. Another example of an elephant parade in Kerala is Thrissur Pooram, where fifteen decorated elephants stand in rows, with their silk parasols changing colors and peacock feathers dancing with the music. It is evident that elephants are not wild mammals to Keralites; they have become a part of their culture and identity. However, the vibrant festivals with abundant tourists and locals are unfortunately not as joyful as they seem. There is a dark, twisted truth of elephants' treatment under the surface of our adoration for elephants; our words do not reflect our actions. 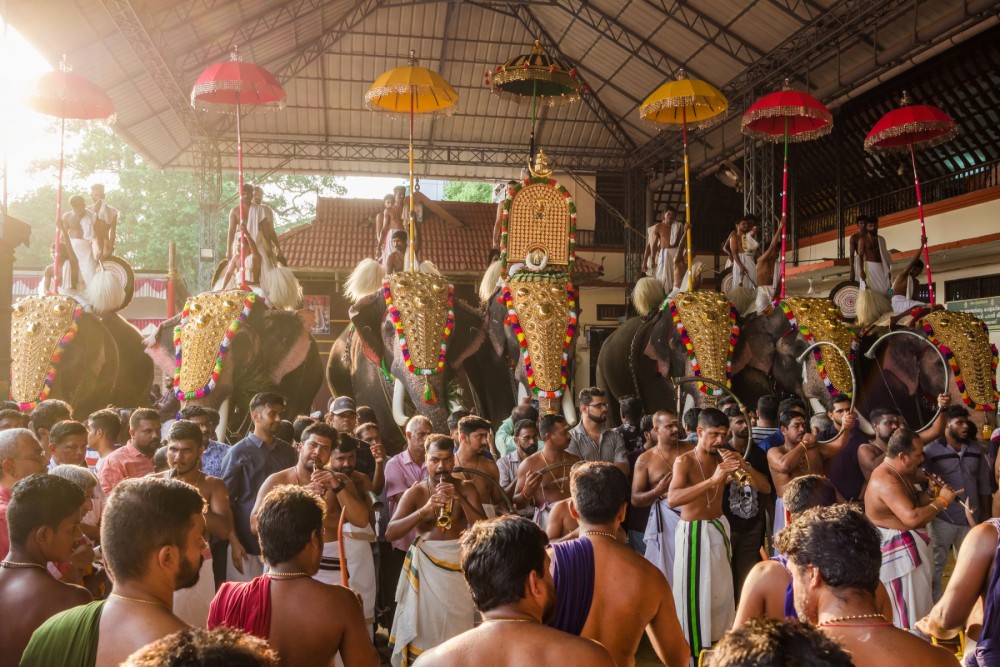 In reality, these ‘decorated and celebrated’ elephants are stolen from their families, beaten, whipped, and treated like slaves. According to BBC[2], India holds more than 4,000 elephants in captivity, mostly in Assam, Kerala, Rajasthan, and Tamil Nadu. Elephants face regular mistreatment from their caretakers. To begin with, trainers/mahouts employ a  horrifying practice of ‘breaking the elephant's spirit’, a brutal process to make an elephant submissive to humans. The method involves the caretakers beating a chained elephant with metal rods and sharp tools for over 72 hours. This process is also called the Crush. And to make matters worse, elephants are forced to ‘hold their heads high’ during this agony. These actions affect elephants' mentality, causing incidents to occur, such as ‘running amok’.

In fact, according to The Independent[3], there were 300 incidents of elephants running amok in three months (in the year of 2018), endangering their own lives and those of people surrounding them. We claim we love and worship the sacred elephants, yet why are we putting them through mental and physical torture?

Another key issue is that captive elephants are provided a poor diet and inadequate food. For example, in certain parts of northern India, elephants only have access to glucose-rich dried sugarcane fodder; this is in comparison to the cornucopia available in the wild which includes 100 kinds of roots, shoots, and grass.

Due to a limited diet, elephants can suffer from intestinal infections, lung-related injections, or impactions. Additionally, the captive elephants lack space to graze and exercise. Instead, they are shackled on stone floors causing them to develop illnesses, including foot rots and infections. All these factors have caused the life expectancy of elephants in Kerala to drop 30 years compared to decades ago according to BBC[4]. We may sugarcoat the marvelous treatment of ‘sacred’ elephants. However, the elephants’ poor diet and health conditions are a prime example of their mistreatment and confinement.

While the festivals in Kerala are ostentatious and extravagant, the elephants are genuinely suffering under the facade of beauty. Elephants are carted from festival to festival for hundreds of miles in boiling temperatures. They are forced to stand with shackles, depriving them of any rest. Then comes the actual festival: loud, hot, and terrifying. They are forced to ‘parade’ with chains, carry heavyweights of people, and run races. The combination of frightening fireworks, noisy crowds, searing humidity, and rigid tar roads truly makes it a nightmare for the elephants. To make matters worse, after a long journey, elephants are still forced into beauty and head lifting competitions, which is agonizing and unnatural for them. Kerala has around 500 annual festivals with about 404 elephants (Heritage Animal Task Force), that have to endlessly endure this torture. Is it worth it to put elephants through his misery for maintaining our cultural heritage? 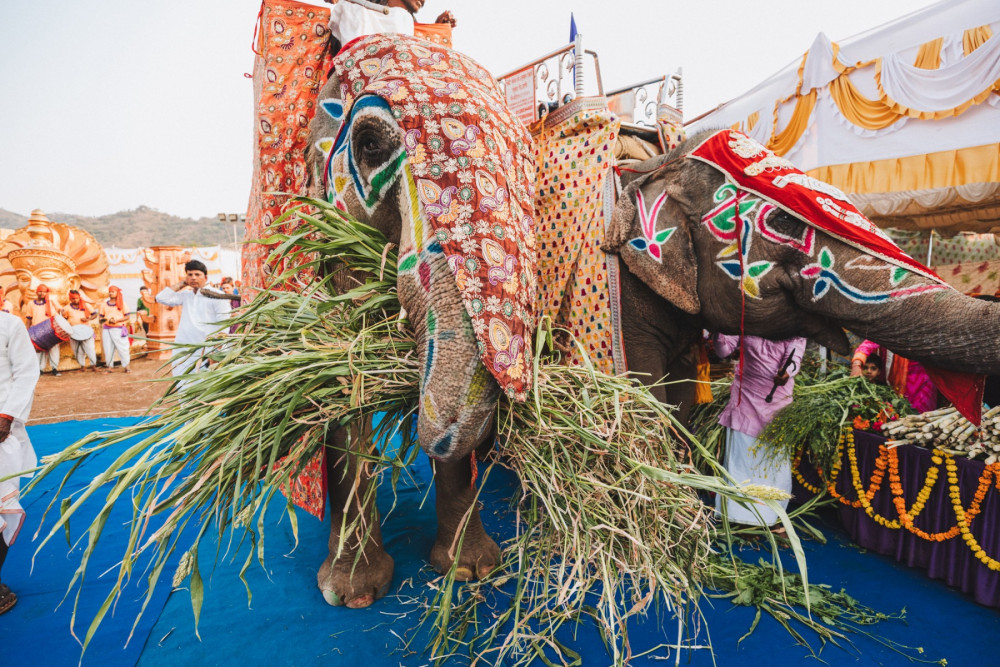 The real question still remains; why do our words not reflect our actions? Why is our adoration and cultural respect for the majestic elephants not evident in their treatment? The irony is frankly disheartening. It is time we realize that elephants are beautiful and graceful and deserve their place in the wild, not in shackles in our temples. Elephants are India’s cultural symbol, and it is time we respect that title ‘for real’.

Elephants are not meant for showboating, competitions or entertainment. They deserve a normal life in their natural habitat just like all wild animals. That is why we are asking the Prime Minister of India to support the call for a global ban of wildlife trade at the G20 summit. Sign this petition and ask Shri. Narendra Modi to support the call for a global wildlife trade ban.